Given the fact that cubes are one of the fundamental three dimensional shapes, it is not surprising that more than one artist has created art that revolves around them. What is more interesting, however, is that in the late 1970s to early 1980s two artists on opposite sides of the United States began to create cubic sculptures, both with a similar purpose to the pieces. In Los Angeles, California Stuart Arends began making boxes in order to escape from the idea of paintings as a window and move towards highlighting the artist’s role in creating art. Across the country in New York City, Matthew Clay Baumgardner started making cubes with the goal of showing his process and highlighting the marks he made on the surface of his work. Despite being separated by almost 3000 miles, these two artists both felt moved to create cubes.

Stuart Arends is an American artist born in Waterloo, Iowa in 1950. He currently lives and works in his studio in Willard, New Mexico. He studied at Western State College in Colorado and the Banff School of Fine Arts in Alberta, Canada, and received his M.F.A. from the Otis Art Institute in Los Angeles, California in 1981.1 It was just after arriving in Los Angeles that he began creating boxes.2 For Arends, the boxes are deeply physical objects. In reference to them he once stated, “I look on the paint I use like blood, the wax like flesh, the wood and steel like bone.”3 The boxes are a way to communicate that his work is not meant to carry the viewer away or allow them to escape the space they are in. The cubes’ three-dimensionality allows them to intrude into the viewers’ space and makes them a presence in their own right. It is impossible to look at one of Arends’ boxes and wonder how it was made since you can trace the artist’s marks on every inch of the surface. The process of making the boxes is what is ultimately on display, rather than the concept of the box itself. 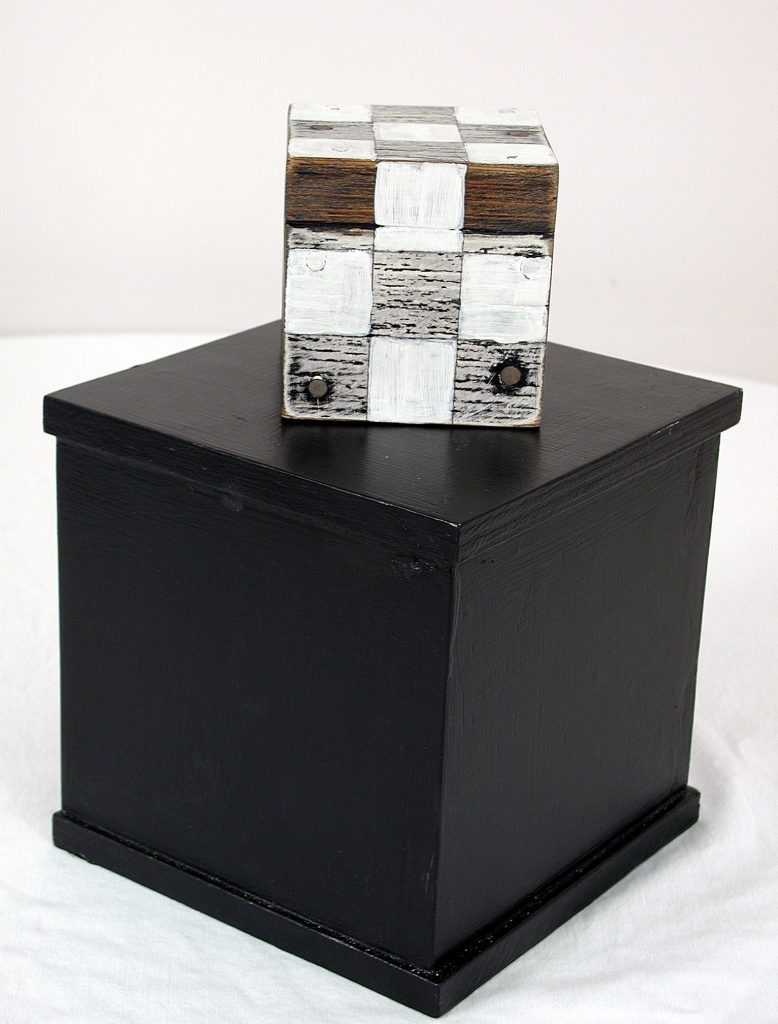 Matthew Clay Baumgardner was an American artist born in Columbus, Ohio in 1955. He received his M.F.A. in Painting from the University of North Carolina in Chapel Hill in 1982.4 Even before creating cubes Baumgardner had an interest in bringing his paintings into the three-dimensional world. Over time he increased the depth of his paintings, bringing the images further and further off the wall. He created his first cube, Old Block, in 1979, although most of them were created after 2010. Baumgardner’s cubes share a similar physicality to Arends’; both of them intrude into the viewer’s space by means of color and form. Baumgardner also shared an interest in the process by which his art was made. In many ways, the process is the most important part of the work. Each cube was created using multiple layers of medium, each of which had marks incised into them before the next layer was added. These marks, both seen and unseen, all have an effect on the final piece. They allow the viewer to track Baumgardner’s movement throughout the creation of the whole piece. Even after the final layer was added, remnants of the past work remained as ghostly images underneath. 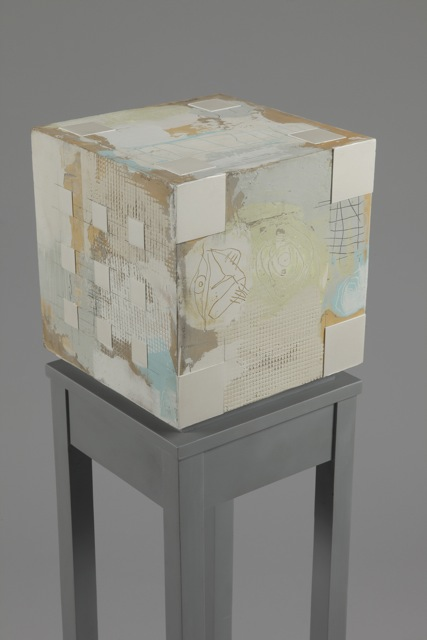 Arends and Baumgardner both saw the cubic form as a way to expose and explore their process through their art. How this idea developed in two strangers a country apart is hard to say. Both artists sought to bring their ideas off the page and into the physical world, turning their work from a surface to an object. Perhaps the simplicity of a cube, or a box, presented an opportunity alike to a blank canvas. Without the complications of figuring out a form, viewers are given free reign to investigate what is on the surface. Or maybe it was truly  just coincidence that caused these two artists to choose this shape and technically similar processes. Whatever the reason, both of them developed a signature style that commands the attention of those who view their work.