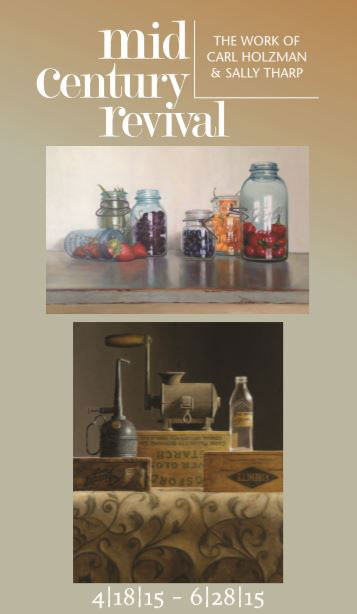 Holzman and Tharp share an interest in the evocative. Their atmospheric compositions do more than depict twentieth century objects. These realistic renderings transport the viewer. They are not sentimental reminders of the past. The works are metaphors which speak profoundly of beauty, authenticity and the passage of time through the “eyes” of ordinary objects. Both artists use the convention of the traditional still life and the disguise of beauty to express emotion and convey philosophical ideas. Their subjects are ordinary utilitarian objects which have lived long lives of hard work and purpose, but they stand today proud, beautiful and strong. There is something clearly contemporary in the approach of each artist to this traditional genre

Carl Holzman is a still-life painter based in Chicago.  Before Carl pursued painting, he had a successful career in business management, but as his interest in painting grew, he found ways to scale back on his day job.  Carl is largely a self-taught artist and has exhibited widely in the Midwest and in Santa Fe and is included in many private collections.  The muted tones of color are mysterious and seem to lure the viewer into the picture plane, offering the opportunity to explore the past with a new and different perspective. This exhibition presents (displays) the recent work of Carl, and his ability to compose arresting and timeless images from the humblest of vintage objects.

Sally Tharp’s work in oil explores small and often utilitarian objects of the past, painting them on a large scale, focusing on color, form and light.  “I am drawn to  these old, marred, scarred , imperfect and obsolete items, finding in them a beauty and character from which to work. I find that presenting these objects on such a large scale requests the audience to see them in a different capacity while at the same time exposing all the flaws and wear of creation and time.”  Sally invites the viewer to experience the qualities in them that she find appealing and to seek the beauty in the often overlooked and discarded items of a past life.  These objects tell a story and it is through them that Sally communicates her own message.