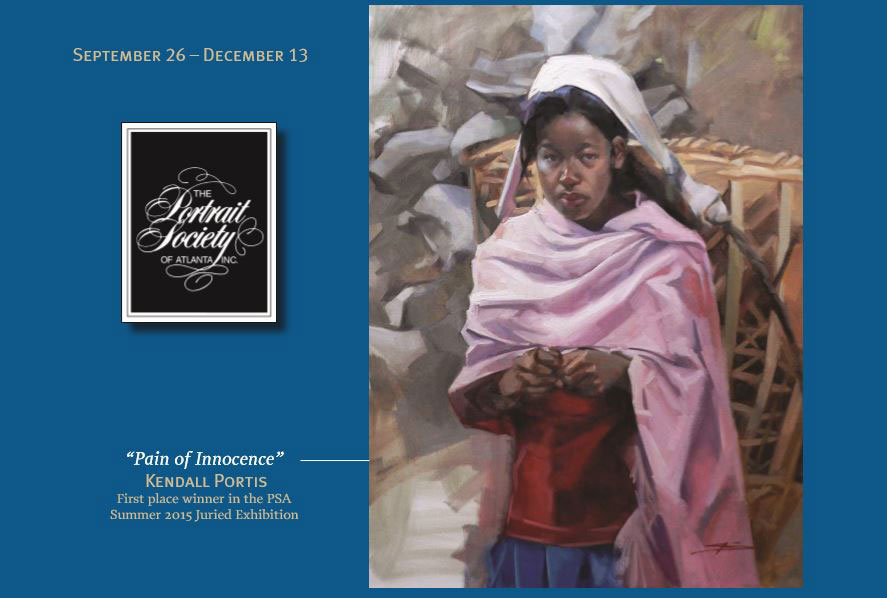 The Marietta/Cobb Museum of Art is pleased to present the Fall Juried Exhibition of the Portrait Society of Atlanta.  The Juror is Edward Jonas co-founder and chair of the Portrait Society of America.  Jonas has been a professional artist for over forty years and his work is incorporated in many collections including the National Portrait Gallery, Smithsonian and the Nasher Sculpture Center in Dallas.  Noteworthy among his clients are professional golfers, Greg Norman, Fuzzy Zoeller, Peter Jacobson, Hubert Green and the family of Jack Nicklaus, as well as former Florida Governor, Buddy Mackay.

The Portrait Society of Atlanta is a non-profit organization of portrait artists whose main purpose is to educate the public to a greater awareness of the portrait as a valid and valuable art form. The art of portraiture, like everything else, has evolved over time.  Whether a portrait is commissioned or created for the sake of artistic pleasure, portraiture has served many purposes.  It is a personal endeavor to remember a loved one, celebrate a life or marking a moment in history, and this is one element that has remained timeless.

What’s in a face? In the sixteenth century it was royalty and their wealthy kin or maybe the church would commission the portrait of religious figures.  Perhaps it is humanity; artists became voices for middle class by visually capturing a day in their life, which was far from idealized and heroic.  During the Industrial Revolution portraiture had become an even more popular subject for artists, and depicting the poor and working class was a task laced with political statements.   Taking a drastic turn for “art’s sake” artists such as Vincent Van Gogh, Paul Gaugin, Pablo Picasso and Henry Mattise were more experimental with their brush with the onset of Impressionism and Post-Impressionism revolutionizing, yet again, to a portrait where representation became a less important factor and Andy Warhol and Roy Lichtenstein began to abstract the face in the name of popular culture and commoditization. Portraiture does not end here, but perhaps this is enough raise the question for each one of these portraits, what’s in a face?