Vignettes of America: Selections from Our Permanent Collection

Vignettes of America: Selections from Our Permanent Collection 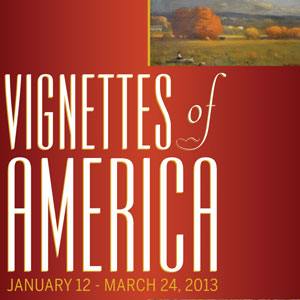 The Marietta/Cobb Museum of Art is proud to present Vignettes of America. This exhibition is comprised of a selection of landscape paintings from our Permanent Collection.  The majority of these paintings were created by American artists that were influenced by The Barbizon School, and the Impressionist and Tonalist movements between 1850 and 1910.

The Barbizon School consisted of a group of European artists who met in the Fontainebleau Forest, south of Paris, from 1830 to 1870. This group, including Claude Monet, Pierre-Auguste Renoir, Alfred Sisley and Frederic Bazille, attempted to achieve realism by emphasizing color, lights and darks, soft forms, and loose brush strokes.

However, with the invention of the camera in the mid 19th century, The Barbizon School of artists began to move away from realism and began the movement known as Impressionism.  They no longer strived for realism, as that was now being achieved with the camera. Impressionist paintings are characterized by small, thin brush strokes that create an impression of reality.  Many of these artists practiced plein air paining, that is, painting out of doors.

Between 1880 and 1915, two groups of American landscape artists began to emerge that were inspired by the Barbizon School. The first group, known as the Luminists, was fascinated by light, often painting dramatic but sublime vistas.   The second group, the Tonalists, however, emphasized atmosphere and shadow, harmonizing with nature.  The early had much less interest in detail or accuracy.  The qualities of this style of painting are usually poetic, elegant landscape, sparkly decorated and tonally uniform, choosing emotionalism over reality.  Vignettes of America, included works by notable American artists inspired by The Barbizon School such as Franklin DeHaven, George Inness, Henry Ward Ranger, Bruce Crane, and Edward Potthast.