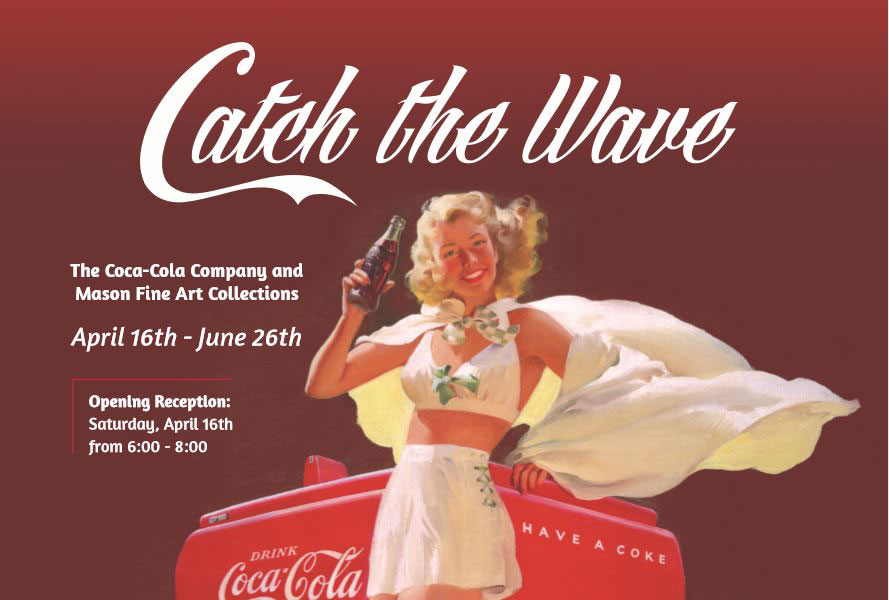 The title of our exhibition, Catch the Wave, is a slogan from 1986 that was created to introduce the “new” taste of Coca-Cola Classic, commonly known as Coke.  Slogans are just one way that The Coca-Cola Company advertises the pleasures of their product.  Throughout history, the company has linked its flavors with the most popular designs and lifestyles of the era through art in advertisement, connecting people with their product through fine art.  Illustrators were not recognized as artists at the time, but Norman Rockwell and Haddon Sundblom, the leading artists of America’s Golden Age of Illustration, were chosen by The Coca-Cola Company to exemplify the classic, All-American image in the first half of the century, up until the 1960s when their work was replaced by photography.

Art for The Coca-Cola Company began with Hamilton King, an artist that the company used to illustrate the beautiful “Coca-Cola Girls” depicted on calendars and serving treys between 1910 and 1913.  These attractive young women would persuade their audience to enjoy a glass of “Delicious” and “Refreshing” Coca-Cola.  In the mid-1920s, The Coca-Cola Company began working Haddon H. Sundblom, a name that has become synonymous with both Coca-Cola and Santa Clause.  Sundblom’s work is displayed throughout this exhibition, featuring both his “pretty girls” and Santa Clause.  Between 1928 and 1935 The Coca-Cola Company commissioned Norman Rockwell to create six oil paintings that were developed into a variety of finished marketing pieces and these works are on display in our front gallery along with a few studies.

Catch the Wave features both these classic pieces and the new artists who have worked with The Coca-Cola Company throughout its history of advertisement.  The classic works of Rockwell and Sundblom provide a nostalgic glimpse into the past, and new artists such as Steve Penley and Kate Brinkworth represent Coke in the modern era.  Contemporary artists represented by Mason Fine Art are included in this exhibition to further illustrate that Coke is truly part of our way of life.  Whichever way you look at it, The Coca-Cola Company represents the good old times and is an International icon that remains timeless through its Fine Art.